British Music Experience at the O2 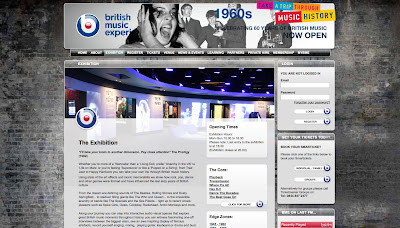 On Thursday the 28th of May I went to the British Music Experience at the O2 Bubble.

The British Music Experience is an Exhibition that lets you experience and learn about Music from different decades. It’s also a completely interactive exhibition, combining cutting edge audio and visual technology with some of the most coveted music memorabilia of all time.

When you get there your shown into a small Cinema room with 1 row of seats, Lauren Laverne is presenting the video and she explains what to do when we get into the Core and how to use our ticket, the ticket is not just to get you into the exhibition but also to use in it, The ticket is known as a “smarticket” that ticket allows you to swipe it on a card reader next to the displays that you like so that when you get home you can go onto the website and register, which lets you continue your British Music Experience. Once your logged in to your own personal area you then type the code that’s on your ticket in and it sows you all the displays that you swiped your card on and more about them, which I thought was very clever,

After the preview in the small cinema room you walk through this corridor into “the core” (a circular shape) which had small touch screens with the latest head phones connected to them and you select a time zone from 1945-2008 and it will tell you what’s hot and some facts about music in that time. Also in that room there were 2 glass boxes, both with a time line ant the top, 1 of the boxes had different radios from different times and in the correct place in the time line the other box had record players to stereos again they were under the point in time in which the were made. In another part of the room there was a table with a map projected onto it, with a scroll ball you scroll the cursor to different parts of the world and it will tell you an artist that came from that part of the world and with headphones it would tell you some facts about that artist. There was also a small room inside the core were you would select a type of dance music and have a lesson on how to dance to a song, then you can watch a video of you making a right fool out of your self lol.

Around the room there were other open doors leading into other rooms all the rooms were set on a time line so one room would be 1945 to 1962 when another room would be 1993 to 2009 in each of these rooms were items of clothing or instruments belonging to famous artists from that time, also you can watch interviews of musicians talking about musicians from the time in which the room is set. In one of the rooms there was also a screen were you can select and album and learn all about it.

Before all of those rooms was one other room called the “Gibson Interactive Studio” and inside it were lots of guitars, basses, drum sets, pianos, a microphone and a mixing desk, some of the guitars, basses and drums had a touch screen next to them with interactive lessons with the musicians that play that instrument in the song that you choose the lessons range from beginner to advanced and then pro so any one can do it, some of the instruments didn’t have lessons on them and were just free play which was great fun. There was another room at the end of the time line rooms and this room was called “the future” I’m not quite shore what this room was all about but I think it was trying to tell people that nobody knows what music will be like or how we will listen to it in the future.

Over all I had so much fun, the whole exhibition was interactive and very factual, it’s great for learning all about how music changed through time and I advise every one to go and have a look tickets are £12 - £15 and it’s so worth it (but I would advise you not to go on your own to get more out of it)

Posted by Anonymous at 9:48 pm

Sounds amazing Seb. I might take my kids there. Something strange happened when you posted your entry. None of the pictures appeared. I've added a link to the website at the top with a picture. Hope it's OK? I think reviewing an artistic event is part of the criteria for the silver Arts Award so you're well on the way with this great post.

Really nice review of the British music experience, It's really made me want to go now might take my family along with me!!

What about your camping trip??