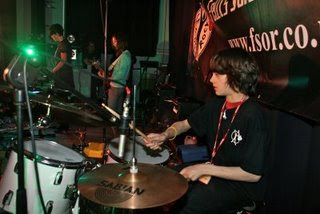 Over the second week of half term I was working for Felix School of Rock which is a week course where kids can go and join with some other kids to form a band and they learn 3 or 4 songs to perform in a gig at the end of the week, which I think is a wicked idea. Anyway I was working there as an assistant so basically I had to help teach some stuff a bit and set up the rooms for the bands and I had to set up the stage for the gig. When I got there Felix said I would have to play for a band because they didn't have a Drummer which was wicked! Seriously I had so much fun and I got to play at the gig and do the Drumageddon which is where each drummer comes up on stage and does a 1 minute drum solo (I was the best of course!) Check out my my Drum Solo in the video at the bottom of the post. Check out my behind the scenes photos on Flickr. This doesn't have much relevance to what we were talking about but I just wanted to tell you what I got up to during the holidays. What about you?

Posted by Anonymous at 8:05 pm

These guys look like they have a lot of expernce running a big event which involves the community - I think they also do there gigs at a school (prendergast?)

My 2 weeks of easter was work work work :) also some 'Urban Exploration' at a basic level an explanation here - http://en.wikipedia.org/wiki/Urban_exploration

Nice work Seb. I've taken the liberty of re-formatting your post a little. Hope you don't mind. I think it's interesting that you didn't think your post was relevant to our previous discussions. Let's have a think about that for a minute:

1. You did something creative in your holiday that involved using your skills and volunteering to help a community of young musicians to which you belong
2. You photographed your adventures and uploaded the images to a Web 2.0 photoblogging service
3. You uploaded a video of your performance to an educational blog and wrote thoughtfully about the experience of taking part in a highly creative event

I'd say this was all pretty relevant to what we've been talking about, don't you?!

this is a realy good music course by the look of things i think i know the man that runs it flex glenn since he was my i.c.t teacher at primary school.

Well done to Matthew, it must of been that conversation I saw you having with mr Nicholls in break bar this morning.

I speak as a man who has tried and failed to play a drum in a samba band. I started to with one drum and was moved to easier ones until there was no easier ones left, so I had to play the samba equivalent of the triangle, until eventually even that proved beyond me. So as a drumming disaster I salute your talents.

I would also echo Mr. Nicholls comments - I think some of your new media know how has become so intuitive that you underestimate what a modern and progressive young chap you are!

i have been a massive fan and have taken part in 3 gigs now it is a great event well worth it.