The power of the DSLR

This is a short behind-the-scenes look at the most recent Lucas Films production 'Red Tails'. What's remarkable about the film is that some of the key scenes are being shot using Canon DSLRs. Although this is still an unusual situation in the film industry, the fact that these cameras can shoot both stills and high resolution video footage makes them the perfect tool to use in schools. And now we have the powerful example of George Lucas' empire to justify their inclusion as an industry standard tool.
Posted by Jon at 11:03 am No comments: 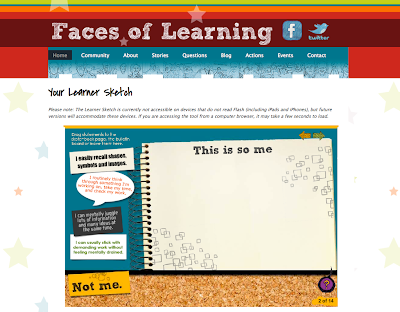 I was recently sent a link to the Faces of Learning website. It's a really interesting project designed to elicit stories about individuals' experiences of learning. Once registered, you can share your story either by text or voice recording. The project aims to:

envision a world where all people understand their strengths and weaknesses as learners, and where everyone expects and demands high quality learning environments throughout their lives.

Not a bad ambition.

One of the features of the site is an interactive sketchbook in which you paste statements about yourself (you can reject statements you feel don't adequately represent you to the bottom of the page). Once yo have chosen all your statements and posted in the sketchbook, you are shown the final version with additional comments designed to encourage you to reflect on your strengths as a learner. Extra information about these various attributes is also provided via hyperlinks. The last page encourages you to reflect on things you may need to work on. You can download (as a PDF) or email your sketchbook.

It occured to me that this might be an excellent way for us to further explore the assessment of Personal Learning and Thinking Skills and encourage more meta-cognitive reflection. It might, for example, be a great way to begin a project in Tallis Lab, providing a kind of self-assessment of perceived learning power that could then be used to inform future discussions with each students about the progress they are making.
Posted by Jon at 9:36 pm No comments:

This week I shall be mostly investigating the education system in Finland.
Posted by Jon at 9:52 am No comments:

This year's Turbinegeneration theme is Time & Place. This pack of activities supports Tacita Dean's installation in the Turbine Hall and contains some fantastic suggestions for art exchanges with partner schools.
Posted by Jon at 7:51 pm No comments:

2011 Rethink Scholarship at Langara Call for Entries from Rethink Canada on Vimeo.

Music Helps! from Lamson To on Vimeo. 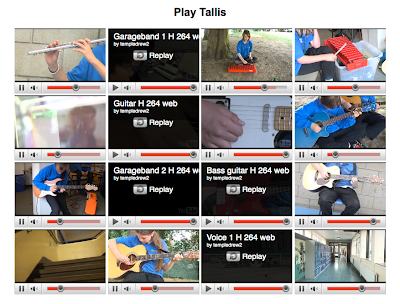 I loved so much of the learning that took place during Tallis Perspectives but this is one of my favourite projects. It was inspired by the great website Bb 2.0 but with the idea that we could try to capture the ambient sounds of the existing building before it is demolished to make way for our new playing fields.

It proved to be quite a technical challenge (both in terms of the music and the film making) but the end result is a lovely collage of noises and sights. Well done to all the members of staff and students who worked on its creation!
Posted by Jon at 11:29 pm No comments:

What is Project Based Learning? 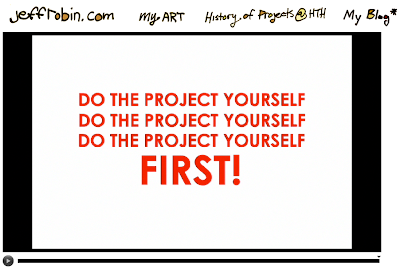 And here's what it's NOT in case you were wondering.

PS Thanks to Tammy Parks from Howe High School for the link.
Posted by Jon at 11:02 pm No comments:

Yesterday I discovered by chance that Thomas Tallis School has won the £3500 Cassio prize for the best exhibit at the Royal Festival Hall's '51 Festival of Britain anniversary show. 42 schools across the UK were asked to submit work to the show for a special pavilion showcasing the work of Schools of Creativity. A similar schools pavilion formed part of the original 1951 show. We submitted several pieces: films of the Tangled Feet residencies and performances, The Crate film made by the Tallis Creators with Eelyn Lee Productions, a films about cultural learning and the arts made during our trip to Oklahoma, our Manifesto for Creative Tallis, and the designs created for the walls of the new building by Gilles & Cecilie Studio.

I happened to be at the Southbank yesterday and popped in to see the pavilion. I bumped into Rehana Mughal, one of the practitioners working on the exhibition, and she told me that we had won. Amazing!

What struck me most about the whole show was the very careful way the exhibits had been displayed and the way the experience of ordinary people who had visited the 1951 exhibition had been foregrounded. I then discovered that the exhibition had been co-curated with several volunteers and that they had all learned a huge amount about how curation works from the experience (see above film). Earlier in the week, I had been fortunate to meet two of the assistant curators at Tate Modern to discuss ways in which Thomas Tallis School could be more involved in the education aspects of the Tate's work. I will be joining the teacher consultation team in September. We had a great chat about several possible initiatives to encourage young people to think about how exhibitions are constructed and designed and the similarities between designing an exhibition and curating an ePortfolio. These skills of selection, visual communication, literacy and cultural awareness seem to be even more crucial on the web as young people find ever more sophisticated ways to share their talents or, with little thought and sense of responsibility for their digital presence, advertise their shortcomings and inadequacies.

I really look forward to the final two days of the Tallis Perspectives cross-curricular learning project, precisely because there is an expectation that the learning that has taken place is shared publicly in a series of exhibitions, performances and installations. In the 21st century, everyone is a curator!
Posted by Jon at 9:50 am 1 comment:

I am delighted that we will be taking part in this year's version of Beau Lotto's brilliant i, Scientist project at the Science Museum. Check out this film to get a glimpse of the great learning in store for our dedicated team of explorers.
Posted by Jon at 10:16 pm 1 comment:

A celebration of 40 years of Thomas Tallis School.