This blog represents a virtual archive of the work of the Creative Tallis Action Research Group. The group no longer exists but we are still very much committed to promoting creative learning at Thomas Tallis School. Check out our Tallis Habits, for example.
Posted by Jon at 3:17 pm No comments:

Email ThisBlogThis!Share to TwitterShare to FacebookShare to Pinterest
Labels: archive

Art Show 2013, a set by Tallis Photography on Flickr. 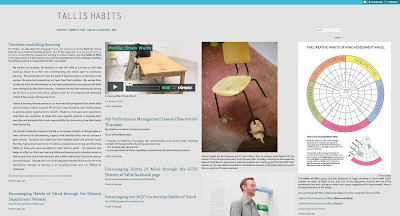 Check out the Tallis Habits blog which documents our thinking about embedding creative learning Habits of Mind across the curriculum.
Posted by Jon at 9:48 pm No comments:

The value of creative partnerships 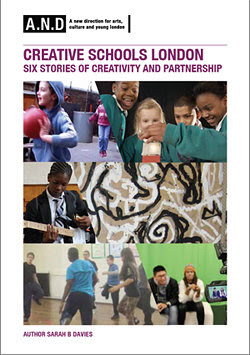 Six London schools talked to A New Direction about their experiences of being involved in the Creative Partnerships programme (2002-2011) how it made a difference to their school and why this approach is helpful in driving positive change.

Talking about their progression since, they discuss the value of a creative approach across the curriculum for its benefits to staff, studentsand the wider community, and how they have managed to continue to maintain partnerships with creative professionals and organisations. Highlighting specific projects and approaches, and the change and impact that these had, others chools can use these six pieces as inspiration, and starting points for their own explorations of creative approaches to teaching and learning, and of building effective partnerships with the creative and cultural sector.

The Thomas Tallis School document can be downloaded here.
Posted by Jon at 1:13 pm No comments:

“Democracy cannot flourish where the chief influences in selecting subject matter of instruction are utilitarian ends narrowly conceived for the masses, and, for the higher education of the few, the traditions of a specialized cultivated class. The notion that the "essentials" of elementary education are the three R's mechanically treated, is based upon ignorance of the essentials needed for realization of democratic ideals.”
John Dewey 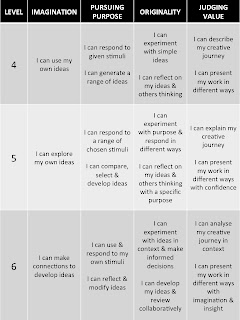 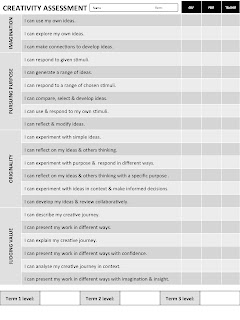 I had a lovely chat with three colleagues from Burnside School in the North East on Friday afternoon. Despite a dodgy Skype connection we managed to discuss our respective school contexts and the issue of how to establish and assess creativity and/or creative learning both within and beyond the arts.

At Burnside they have developed, in partnership with the excellent Susan Coles (@theartcriminal on Twitter) a framework for assessing creativity as a separate subject within the arts curriculum (see images above). The one hour a week course blends aspects of the arts disciplines taught at the school - art, music, dance and drama - but with an explicit focus on developing creative capacity and learning skills. We discussed the pros and cons of teaching creativity within the arts and the responsibility of other curriculum areas for teaching and assessing creative learning attributes.

I shared out brief flirtation with a Creative Learning APP framework and the Creativity Wheel that was created by the Centre for Real World Learning at the University of Winchester. I also talked briefly about our Tallis Lab experiments at KS3 and our commitment to creative learning in the context of ICT.

I really hope we can continue to share ideas and thinking about this area of curriculum development. I also hope that the team at Burnside is able to create a blog to document the progress of their work in this area. I am sure colleagues across the country would be interested in what they have to share.Thanks again to Susan for putting us in touch.
Posted by Jon at 10:39 pm No comments:

Tony Benn on art and work

I read the following text today in the latest edition of the Tate magazine. The piece is a discussion between Barbara Steveni and Tony Benn about his role in helping to establish the Artist Placement Group (APG) in the early 1970s. The group sought to position artists in large organisations, in industry, the health service and in government.

In response to a question from Steveni about why Benn was interested in lending his support to the APG he has the following to say:

"I believe that the really interesting things in life are when two disciplines interact. I don't believe in breaking people up into little sections. I think everyone has an artistic, an administrative and a creative talent, just as they have a destructive and bureaucratic capacity. What you did with the APG was to bring out these aspects in everybody. I think society finds it easier and more convenient to maintain the hierarchies so that nobody gets out of their place. It's designed to keep us in our place by using words we don't normally use and making us feel inadequate. I think what you've done is to break down the barriers."

I love several things about these observations, primarily Benn's commitment to the value of the arts in ordinary life and his understanding of the need to facilitate inter-disciplinary conversations. Having seen a fairly impenetrable exhibition in a contemporary art gallery today, the arts are as to blame as any other institution for reinforcing the separation between artists and non artists through technical language (jargon) and modes of production and display.

However, Benn's words also seem to me to be a powerful argument for the importance of artists (and other creative practitioners) playing a role in articulating the tensions, opportunities and energies present in all places of work. There have been several initiatives like the APG, Creative Partnerships being just one example. Imagine how exciting it would be if every workplace had its own artist in residence. It's clearly an idea supported by the current government since Eton College has at least four artists in residence working with the school at any one time.

Isn't it time that all schools (and other places of work) had the same resource at their disposal?


- Posted using BlogPress from my iPhone

As part of the Hayward Gallery's Wide Open School in July 2012 members of the Huddle, the Southbank Centre's young people's group, worked with artist Yara El-Sherbini to come up with an alternative syllabus. Exploring important life lessons you can't take a class in -- how to avoid people you know on the bus, how to believe in government, how to stop comparing yourself to people you went to school with -- the Huddle staged an intervention in the Royal Festival Hall, taking over the public announcement system to ask the public what they thought.


This would be a fantastic cross-curricular project to undertake in school, drawing on the experiences of young people and their curiosity about life and learning. Like cultural institutions, schools are equipped with public address systems, bells that tell you you where to go and when, a programme of activities and a team of backroom and front of house staff. Wouldn't it be interesting to try to disrupt this system of activities, roles and responsibilities, even for just one day, to reawaken our curiosity and love of learning?
Posted by Jon at 12:15 pm No comments:


PifPafPresentation7min.mov from Al Ma on Vimeo.

When we decided that the school uniform needed refreshing we could have adopted two different strategies:
Obviously, we decided on the second strategy and we were lucky enough to work with the fabulous Alina Moat, a recent graduate from the Centre for Sustainable Fashion at the London College of Fashion. She came highly recommended by the equally fabulous Professor Helen Storey with whom we have been on a number of creative learning adventures. The entire project is documented on this blog.

Alina recently visited our new building to see the students wearing her designs. It was lovely to see how pleased she was with the end result of the project and we are equally proud of the fact that our students are wearing clothes that are genuinely sustainable and distinct. Alina's real reason for visiting however was to tell us about her latest design project and to ask whether we would be interested in collaborating with her. Entitled Pif Paf, the project aims to teach young people how to use programming software by employing a number of creative learning strategies.The video above describes succinctly how a playful combination of physical, emotional and intellectual enquiry results in students mastering complex processes.

We are hopeful that we can support the next phase of the project, testing the model with a class of Year 7 students over several months as part of our Tallis Lab curriculum. We are very excited about the potential of working alongside Alina again on such an innovative solution to the issue of rebooting computer science education in the UK.

Matthew Shlian is an artist who works with paper. His attitude to creativity is really interesting. He has also managed to create a life for himself which allows him to continue to make art in his studio. He is inspired by the desire to continue experimenting with paper engineering, to test the limits of what is possible. He uses any technology available to him. I love what he says about the process of making something. He failed maths and geometry in school. He relies on imagining forms and testing the possibilities of his material in his hands. If he can see it and feel it he knows he can make it but says that if he knew exactly what the work was going to look like before it was completed he would not bother making it. In other words, the element of risk is all important and the process of solving problems is what motivates him to continue to create.
Posted by Jon at 10:01 am No comments:

Very impressed with the Webr app for creating fully featured sites from a mobile device. Brilliant for school journeys, field trips and project based learning activities.

- Posted using BlogPress from my iPhone