Yesterday, I received the following email from TED-ED, a new off-shoot of the famous conference organisation that produces all those amazing filmed talks that are so inspirational. I forwarded the email to Mr Hawes and he suggested that the Creative Tallis group should respond to the challenge. Here's the email:

1. Math in real life
2. Creativity in Action
3. Inventions That Shaped History
4. How and Why?
5. Questions no one (yet) knows the answer to
6. Mindshifting stories
7. Playing with language
8. Same - and different
9. Things they don’t teach you in school
10. The five minute aha

Click here to see a detailed description of each of the series.

These series, based on ideas received from you, our Brain Trust, have been chosen to cover a wide range of exciting content in a way that can catalyze curiosity and make learning fun. Most series cover multiple subject areas. These TED-ED videos will be less than ten minutes long (perhaps as short as one minute), and they may be identified or created by anyone.

To be clear, we are asking visionary teachers, students, organizations & TEDsters to help us:
1. Identify pre-existing educational videos that can be re-purposed, enhanced & amplified through TED-ED
2. Create & submit original content for the TED-ED initiative.

What video format should submissions assume?
Users may submit pre-existing educational videos. We also accept content that is created explicitly for TED-ED. Original videos may assume a variety of creative formats which include:
-Audio submissions
-Animations
-Micro-docs
-Presentations
-Clips from video & film

What do we mean by Audio Submissions?
We understand that there are many experts in our experts who do not have the resources, time or skill-sets to produce high quality video. The capacity to record high quality audio, however, has become a relatively ubiquitous technology. For these reasons, we have decided to encourage and accept audio submissions.

An audio submission may be comprised solely of audio, or it may be accompanied by rudimentary visuals that help communicate the creators point. Think of them as a “work in progress.”

If the audio message is appropriate and of high enough caliber for eventual placement on TED-ED, we will work to pair the recording with one of our professional or volunteer visualization artists (ie: animators, presentation specialists, documentarians, etc.). The visualization artist will work to create imagery that brings the creator's message to life, making it more persuasive, more educational and more likely to be shared. If and when the collaboration succeeds, the finalized video will be syndicated on TED-ED. You can learn more about the "Audio Only" process by viewing the TED-ED workflow diagram.

What parameters must all submissions meet?
Users may submit pre-existing educational videos, or original content designed specifically for TED-ED.

Pre-existing audio or video submissions are defined as videos that have already been published and syndicated on the web. They also must:
- Be shorter than ten minutes
- Come with a link to the content
- Credit the original creator of the content

A Vision for the Future

Part of the process of consulting members our community about the vision for Thomas Tallis School has involved posting a link to a survey on Facebook asking the 650 members of the Alumni group to respond to 4 key questions:
There have already been some fascinating responses (I'll wait til a few more appear before attempting to communicate them) but I was particularly gratified to read this response to question 2:

It's personality and ethos. I would hate to see it become a school where only grades come first. As long as creativity continues to be encouraged and the brilliant care for the student's personal AND academic development continues then hopefully Tallis won't go down the same route as many other schools where students a barely considered as individuals.

Mr Hawes and I have begun a new project with the Year 9 Tallis Lab students entitled Space2Cre8. The project, sponsored by Berkeley University in California USA and the London School of Economics in the UK, aims to create a social network of students from around the world who share their stories using a variety of digital media. Yesterday afternoon, we had a Skype call with colleagues from the USA (California and New York), South Africa and India where we introduced ourselves and found out about their schools and students. We also heard an amazing story about a group of girls from the Indian school who have formed a new organisation battling domestic violence (see video above). It was also really interesting to hear about different perspectives on safety and poverty. The kids from New York and India had exchanged film stories and poems. Both groups had learned a lot about their friends in the other country but, fascinatingly, both developed a different view of their home neighbourhoods. The Indian girls, in particular, began by feeling slightly envious of their New York counterparts but soon realised that they were much safer in India than the Upper West Side, despite the threat of sexual and domestic violence and their relative material poverty.

This is such an exciting opportunity for our students to share their stories about the challenges they face and the opportunities they enjoy. We can't wait to get started!
Posted by Jon at 7:33 pm No comments:

SURFACE : A film from underneath from TU+ on Vimeo.

This short film demonstrates that sometimes all it takes is a new perspective to spark your creativity. Enjoy!
Posted by Jon at 9:10 pm No comments:

Email ThisBlogThis!Share to TwitterShare to FacebookShare to Pinterest
Labels: creativity, perspective, underneath

I saw this today doing a search on Vimeo for videos tagged with learning. Strangely, it articulates an idea that is quite prominent in a book I'm also reading by Ivan Illich called 'De-Schooling Society'. Remember our Pop Up School concept that we presented in Oklahoma and our failed Skills Swap experiment from last year?

What all of these things have in common is a question about the role of schools in the 21st century. What are schools for? Where does learning take place? What is the purpose of education? These are the vital questions facing us in thinking about our move to the new school.

What are your thoughts?
Posted by Jon at 11:14 am No comments: 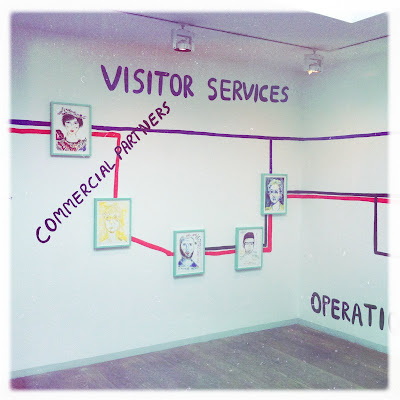 I visited the Whitechapel Gallery today to see the new Paul Graham photography exhibition. Upstairs was another small show featuring portraits of gallery staff by young people. Here's what the gallery has to say about it:

In the corridors of the Houses of Parliament and the back rooms of third division football clubs, hang portraits of heads of state and treasured past employees. Artist Lady Lucy follows in this tradition, and uses portraiture as a process for communication and interaction. She encouraged a group of people aged 16-19 to set up a portrait studio, where staff from the Gallery were invited to sit and reveal aspects of themselves and the institution.

What I liked most about the show was the informal way it had been hung. All the portraits were in vivid green frames at various heights. These were linked together by hand painted coloured lines with written descriptions of the staff names and the department where they work. It all looked like a wall sized mind map. I wondered if we could attempt something similar in the gallery we will have in the new school?
Posted by Jon at 8:54 pm 2 comments: