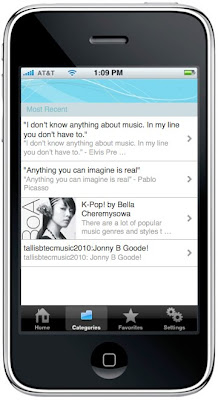 I have received a few favourable reviews on Twitter of our new school iPhone and Android app and was prompted today by the very generous Johannes Ahrenfelt (@ahrenfelt) to describe the rationale behind and the process of making it.

Since we began blogging just over a year ago as an Action Research Group on these very pages, it has become increasingly popular in school as a way of creating a reflective learning journal. We now have well over 25 semi official school blogs and many more if you include those kept by individual students and class groups. Tallis LAB has been influential in popularising the use of blogs and they have had a tremendous impact in a variety of curriculum areas, particularly those with a vocational focus. I think this must be for several reasons:
I am sure there are other reasons but these are paramount from my perspective.

When I realised just how many blogs there were in existence and, in addition, how many other virtual networks had been created for learning in school (Twitter, Facebook, YouTube, Vimeo, Ning, Flickr etc.) I began to think that it would be amazing to share these with our whole school community. Then I stumbled across a recommendation on Twitter for iSites, a company that offered to help you create and publish your own iPhone app. As someone who really values the learning potential of the iPhone, I was immediately intrigued but dismissed the idea that, with my very limited technical know-how, I would be able to do it myself. Nevertheless, I checked out the site and began to dabble.

I very quickly realised that it was easily possible for me to gather together a range of feeds, design a simple splash screen and header (using some of the artwork created for us by the brilliant Tak! Design when they sorted out our school's graphic identity) and organise this content into suitable headings - blogs, twitter, video, photos, projects. The iSites interface is very simple. The only thing missing is a live demo of your completed app.

It has taken me a total of about 5 hours to create this app and cost only $25. When I felt I had finished it, I clicked the publish button with some trepidation. I didn't realise, at that stage, just how easy it would be to edit and republish on the fly (I have since altered the design and structure of the app about 3 times since it was published 5 days ago). I also wondered whether Apple would approve of the app since the projected audience for it would obviously be quite small given that it was so closely associated with one school.

It took about 2 weeks in total for the app to be approved first by the iSites team and then by Apple. Throughout the process, iSites kept me informed by email of each stage. I have since emailed them a couple of times with rookie questions and the responses have been relatively swift and useful. The Android app appeared before the Apple version by a couple of days. All very efficient from my perspective. I have since looked at other app design services but they appear to be quite a bit more expensive. I suppose it would be better to be ad free, but that seems like a small negative in a largely positive experience of app design.

I am hoping that creating the app will galvanise our thinking in school about the value of blogging, web 2.0 tools, social networking and eLearning generally. It would be great to have more curriculum blogs. We are already talking about using Twitter as out main news feed on the website and a discussion about a possible new VLE and the value of an institutional Google Apps account is well under way.

Based on my experience, I would strongly recommend iSites to any other school considering creating their own app.
Posted by Jon at 9:16 pm

good article, concerning the iphone app, i do a benchmark of the application that convert RSS to Iphone application (and Androïd)