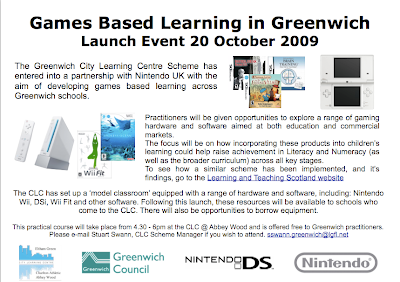 I had a very enjoyable afternoon at the Games Based Learning event hosted by Stuart Swann at the Abbey Wood City Learning Centre. Stuart made the point that games had played a vital role in learning ever since learning began, but that using modern gaming devices and technology tended to be viewed with a degree of suspicion. I think it would great for Tallis to find ways of challenging some of the existing attitudes to gaming and to explore how gaming might support learning.

I had a little play with a Nintendo DSI and was amazed to find it had cameras, a web browser, an audio recorder as well as lots of capacity for games - in a word a lovely portable device that could be put to good use in all sorts of contexts. By the by, I had a go at Nintendo Scrabble and used all seven tiles to make the word erudite (put the e on the end of car to make care), but to say more about that might be seen as bragging.

My gaming experience is a bit out of date (anyone remember Binatone tennis?), so I would be really keen to get some gamers involved in investigating how we might put this technology to good use. So if you had 16 Ninetendo DSIs or A selection of Wi stuff what would you use it for, and what benefit would there be from using it?

Is that 16 or nine tendos? Wi or Wii? I definitely remember the blippy tennis game and green space invaders on the TV. I think we had some kind if Atari device back in the day. Anyway, add to Mr Hawes' list 9 PSPs. Evidence seems to suggest that young people brought up on games have had their brains rewired - they are better at multiple-tasking, better at processing complex narratives and have great hand eye coordination. I do think there's something really interesting going on here and I wonder if the connection between game playing and social connections is one we could explore a bit more?