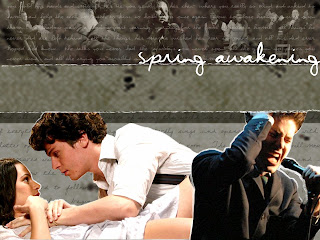 Me and Sebastian went on a Personal Well being and Economics trip to the 'West End'. Spring Awakening, is a 2009 musical set in the 10th Century about students becoming teenagers and falling in love.

As we left from school at 1pm to kidbrooke station, we were talking about whether it was worth going to see the performance and miss the chance of going home early... We reached 'the strand' and saw all the big theater performances go past us; 'Joseph and the technicolour dream coat', Lion King, Wicked etc. When we finally saw a nice looking sign with 'spring awakening' in capital letters, we walked inside an extremely posh foyer with stairs that lead into the theater... There it was the most grandest yet poshest place I had ever been in, the stage was set up like an old school and the seats were all typically red with gold plated numbers on them, there I sat nearer to the stage with a quiet posh lady beside me with a Chinese family behind, all interested in what this performance could be about, they obviously had no clue what so ever when I had over heard creative ideas on what it can be about and what i could be about. Anyway, so the performance began, main lights turned down. When there a girl stood on a chair with a spotlight and nothing else, just on her, she had seemed to be moving her hands around her body which gave us an idea on the story of the performance. Throughout the spectacular musical the characters had kept doing the same hand movements. To be honest, in some ways this play could be called a very creative and artistic way to show teenagers growing up and becoming adults.

The way in which they had portrayed this in the story is that 'Melchior' (Aneurin Barnard) was a student at an extremely strict boys school and had an extremely lazy friend who just kept failing in everything 'Moritz' (Iwan Rheon). But 'Anna' (Natasha Barnes) tries to ask her mum an awkward subject (sex). Sian Thomas who starred in 'Harry Potter and the order of the phoenix' (Anna's mother) really doesn't want to tell her where babies come from, and lies, saying "you just fall in love". Thinking this is true, she avoids ever falling in love, yet her and her friends just fantasize cute boys especially Melchior... Melchior however who had always fancied her, knew all about where babies came from and that wasn't just falling in love. So, one day he had bumped into her, Anna all nervous didn't really want to speak to him just in case.. As time goes by they start remembering their child hood together and begin to fall in love!!

Days after, the doctor comes to visit Anna and her mother, due to Anna feeling a bit 'ill' when the doctor soon finds out she's... PREGNANT... Anna not understanding how it's possible and her mother in complete and utter shock, as she is not married this could ruin her reputation, in this in mind she gets Anna killed... However Melchior was sent away to another school for teaching Moritz about making love. This at the time was very disrespectful, which meant he'd have to leave Anna. But Moritz however gave up on life and committed suicide, leaving the girl that really loved him. More days go by, when Melchior gets the news that Anna is pregnant. He runs back to her sending a message saying meet me at the cemetery, by this time Anna was dead. He waits and waits when she doesn't seem to have turned up, when he then came across Anna's grave... Which means the two people most close to him had both past away, he had nothing left... when in one particular song he was about to kill himself when they showed Moritz and Anna raising from their graves persuading him not commit suicide, maybe to portray them still being with him. This is one spectacular musical, and it's a must see performance...

extremely long first post Raihan, but really good i must agree, the play was awesome i thorough enjoyed it and i advise people to go and see it,
it's comical but also serious at the same time,

I absolutely loved it.

I really did have an amazing time, it's not everyday you get to go down to the West end... I agree, for my first post this was quiet long. Sorry If I've ruined anyone's eyesight. But to be honest there was just too much too say about it.

Thanks again for your comments..