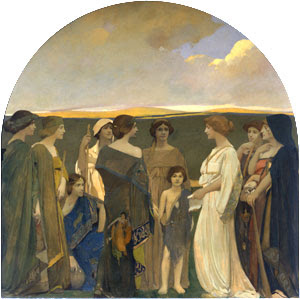 This afternoon we were visited by Professor Helen Storey who came to talk to us about a new project idea with the working title of Catalytic Clothing. Helen explained that Catalytic Clothing has the potential to transform human behaviour and imporve attitudes to sustainability through the collaboration of the arts and creative sector and those working in science and technology. The aim of the research strand is the development of a product that, when deposited on an item of clothing, bestows it with the ability to break down harmful air-borne pollutants. The active agent within the product will be a material that when exposed to light is able to catalyse the breakdown of the pollutants. The product will be delivered to the surface of the clothing during the traditional laundry cycle. Currently, despite many advances in smart materials and ‘smart clothes’‚ the human's clothing surface area has not been harnessed either as an energy source in its own right, or in this case used as a potential surface area to catalyse a reaction for good use. The overall aim of the project is to enhance a given fabric in such a way that it can actively remove airborne pollutants whilst the wearer goes about their daily life.

Phil Waywell was on hand to talk us through some of the science involved in the project. He explained that advances in science are often created at the very edges of human imagination and that collaborations between artists and scentists can have remarkable benefits. He explained that the key ingredient in Catalytic Clothing worked like a hybrid between sunscreen and a catalytic converter in a car. He reminded us that, in order for a product like this to be economically viable, commercial organisations needed to be convinced that there was a profit to be made. The team were investigating several ways to evidence the effectiveness of the technology. We watched a short animation designed to illustrate the impact of Catalytic Clothing. We were asked to imagine a busy Oxford Street in which all pedestrians had washed their clothes in this new product. It would only take 40 people per minute walking along a 1 metre wide strip of pavement to strip the air of harmful pollutants.

Several thoughts were shared amongst the group. How do you prove the effectiveness of something that is invisible? How do we make people more aware of the engineering and science that surrounds us every day without resorting to scare stories and extreme scenarios? How do we manage the often instinctively negative reactions to the new?

Helen was keen to consult us about our reaction to the project idea and to see if we would be interested in collaborating with her both on a bid for further research money linked to the Olympics and, if this was successful, on further developing the educational potential of the project.

In Ancient Greece, the Olympics was as much a celebration of the human mind as it was of athletic prowess. The nine Muses were the spirits that inspired human creative endeavour and imagination. In order to make a link between Catalytic Clothing and the Olympics, Helen has proposed that we might wish to think about our own contemporary Muses, personifications of the kinds of actvities, values or ideals that are relevant to modern life. The Muses also represent inspiration and creativity but not just in the arts since there were Muses of History and Astronomy.

So, it would be great if you could respond to these two requests.

1. What did you think of the ideas contained in Catalytic Clothing? The more specific you can be in your responses, the better.

2. What activities, values or ideals would you choose as your contemporary Muses?
Posted by Jon at 8:39 pm

After seeing the tweet that the creative Tallis did, I did the same I have had one reply so far from my mate Aiden....

im really sorry i couldnt be there. Ihas a science test that ran 20 muinites over time and then had a school govenor meeting. Sounds really interesting

Thanks Tom. There's an interesting point here. As families become ever more fractured (most of my family live hundreds of miles away and my brother lives on the other side of the world) I think we do need to carry round with us the spirits of our relatives. My own muses would include a hybrid of various artists, musicians and authors, those that are able to challenge and transcend the established conventions for representing the world around them. I'd also like to reserve a place for the spirit of education. I'd certainly want to retain the Muse of History and I would be cautious about including anything that might not stand the test of time. How about a Muse of collective responsibility?

I really enjoyed Friday's meeting after school (how often do you hear that) and the opportunity to hear about catalytic clothing. I particularly liked the idea of the best science taking place at the margins of plausibility, and that in this case one of the starting points was a student thinking in a really creative way. I have tried to explain the concept to friends and family, but without Phil's expertise I don't appear, so far at least, to have been successful. This is probably a really good example of how art and creativity have a vital role in helping people comprehend something that sounds near fantastical, and also a process that would, on an individual basis, be invisible. I'd like to have a closer look at the animation - is there a way of creating a link?

As regards the muses? I'll admit that my wife often asks me what I want to be when I grow up, and that it might appear childish, but I would like a muse that represents mischief making and playfulness - not just of the whoopee cushion type, but something that relishes the opportunity for surprise and subversion.

I've posted a message on Facebook and a tweet and sent group texts to friends and family. Friday night's discussion was so exciting, it sent some fantastic visual images wafting into my head of free radical student dance groups on Greenwich High Street - it is after all a borough with extremely high pollution and asthma levels - and in Trafalgar Square; of living installations all over the country, improving everyone's quality of life in flashmob style moments of positive environmental direct action. As for muses, as well as the spirits of treasured relatives & loved ones, and a muse of learning and innovation, I'd want one of freedom and uninhibitedness. I like really Jon's collective responsibility and Soren's subversion too.

I found the meeting really interesting, the science behind the catalytic clothing was really cool, and i liked the idea of using art to influence the public, and help them understand the sciency-bits, expecially the idea of using the catalytic stuff to leave hidden messages, it would maybe be interesting to see what kind of messages or slogans could be used to advertise catalytic clothing?
i too would like to have another look at the animation.


regarding the modern day muses idea, this sounds like a really interesting subject. would be cool to see what other people think. i think that bagsy is a really cool muse as to me he represents freedom of expression, and that art (like grafitti) shouldnt be a crime.

I think an interesting thing about the muses is that they each have different 'props' to make them identifiable.
My own muses I think are more people around me than celebrities. Although there are people in the media everyday that I do aspire to be like in different ways.
A muse of motivation and consistency?
and tolerance!

The catalytic clothing I thought was really interesting and ambitious.
The science behind it seemed to make sense but the thing that did confuse me was how they were going to put a "coat" around the titanium oxide so that pollutants would be able to come in contact with it, but it wouldn't leave the clothes until it did.
Can anyone explain this to me?

Hi everyone, I guess I should start by saying thanks for the invitation to your blog. For those of you who couldn't make it last Friday, my name's Phil and I'm currently taking the lead on the development of the Science behind Catalytic Clothing.

I know some of you would like to see the animation again, but I'm afraid you might need to wait for a week or so whilst the finishing touches are being made (Friday was a sneak preview). I'll let you know once the final version is done.

With regards the question about how we're going to protect the wearer,unfortunately I can't tell you at the moment. If I give the game away, our competitors would find out what we have planned (a big no no when it comes to research).

Hopefully, I'll be paying you guys another visit after the exams to have chat about the Science behind Catalytic Textiles and what else you would want your clothes to do in the future (this time as part of my other job with Cafe Sci). So I might be able to explain how we're going to protect the wearer then.

Oh yeah, I forgot to mention that I've just heard about this guy in Brazil who does "reverse graffiti" (something I mentioned on Friday). It's slightly different from what I meant, but I liked it. See http://www.alexandreorion.com/ossario/images.html for more info. The video is pretty cool.

It's a real shame i can't do fridays :(
sounds like a very interesting idea!
it might come clearer to me when i see the animation.

Just watched the Reverse Graffiti film. What an amazing idea! I love the confused reaction of the police. Shame it had to be washed off at the end, although I suppose this counts as institutional reverse graffiti of a minimalist nature. If you like this sort of thing, I recommend that you check out a film called "The Unconscious Art of Graffiti Removal" by Matt McCormick (http://www.youtube.com/watch?v=I9jyv6WIxUY) Not sure how long the YouTube version of the film will exist. Matt's website has an excerpt from the film (http://www.rodeofilmco.com/projects/film_and_video)

This comment is from an email sent to me by Helen Storey:

It is so good to hear how well you have all received the idea of
'Catalytic Clothing'- it is always scary to talk about new ideas you havealready formed an attachment to, as you know you have to remain open to all sorts of other ideas and thoughts that may change the nature of how it all turns out.

As an artist that works with Scientists, one often feels out of control of your own creative destiny, and yet I know that it is at the edge of that vulnerability that the "new" lies.

I was also really excited by the types of muses you have begun to name. I immediately started thinking how you would visualise them, if you had to give 'mischief' a colour, what would it be ? If you had to give 'Hope' a shape, what would it be ? I also thought about the London Landscape, and if
your Muses had homes in that landscape, where might they hang out and on what surface and why ?

Anyway, keep the thoughts coming and I will check in again soon.'