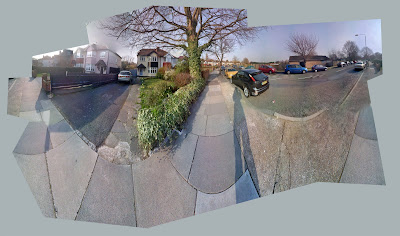 This is my attempt to create a 360 degree view of the world at the end of my drive, inspired by Google Maps Street View. I took about 45 pictures on my iPhone and stitched them together using Photoshop CS3. I've cropped the resulting image slightly at the bottom and filled in a couple of gaps with the clone stamp. Other than that, it's all the result of the automated photomerge function. There are a couple of strange sections - the neighbour's house looks like it's on fire and the edges of the pavements don't meet up, but you can see similar glitches in the Google pictures. Apparently, Google have had to remove some images from Street View because of complaints. One man was pictured throwing up outside a night club, for example. There's also a function for blurring faces. I'm pretty sure that most people will find the new service extremely useful and very entertaining. But does it have any educational benefits? Could we create our own virtual tour of Thomas Tallis School? Would this be a great way to capture the old building before the it is demolished? Could this building be embedded inside Street View? Could we make a ghost version of Tallis that could be explored, by people who had never set foot inside it, from the new building?
Posted by Jon at 4:06 pm

I like your photo and i also like the idea of a street view of tallis i think it's a brilliant idea even an inside view of tallis.
School should so do this as a before and after thing that would be great.