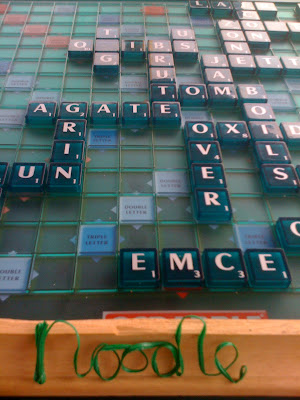 I thought it might be a good idea to go over the running order for Tuesday's meeting. I have asked for us to be second on the running order so we would probably start our bit at around 4.30 - 4.45. I have asked for the tables to arranged in year groups so that there will be a mix of subjects in each group. There will be two tables per year group so when we ask for people to work on the task the year groups will split in half - probably about seven or eight people per group. It would be great for there to be a representative from Creative Tallis in as many groups as possible. I know Tom will be preparing himself for an 'A' level the following day (good luck mate!) So we should have:

So to the running order:

5 mins - Mr Hawes will introduce 'Project Noodle' (There will be noodle salad and chopsticks on the table) and show the wondeful website Mr Nicholls has made. Then Mr. H will explain and introduce the three year planning task that we did last time with the Leadership Team. Mr Challenger and Mr. Murray, we hope, will be noodling on their guitar whilst this happens.

5 mins - Introduce the Creative Manifesto and explain how it came about. I was wondering whether our group's very own Student Governor could take this on - Tom, I know you'd be brilliant at it, as would any member of the group who was willing to take it on.

That takes us up to the hour mark - what do we think?

1. I will make the noodles and have them in authentic takeaway pots to put on the tables. I was wondering if I could dash to the Nicholls kitchen to do that Tuesday period six, but I can also ask Ms Khan to let me use her room. One volunteer to help would be greatly appreciated.

2. We will need enough copies of the three year plans and Creative Manifestos for the meeting. We need at least 14 of the 3 yr plans and I think it might be nice to have at least 28 manifestos. Could you print these off Mr. Nicholls?

3. I know it might not be practical to use Tallis Talk to feedback on the day' but would it be a good idea to open a topic for people to contribute to after the meeting. Could you do this Mr Nicholls?

4. Shall we all meet up in room 208 after school (Monday 15th 3.20 -3.40) so that we can over plans for Tangled Feet rehearsals and anything we need to discuss for the staff meeting?

Apologies for the monster post, and hope to see you after school tomorrow,

Thanks :) Sorry again that I can not make it! Good luck with it all!