We are the people we've been waiting for 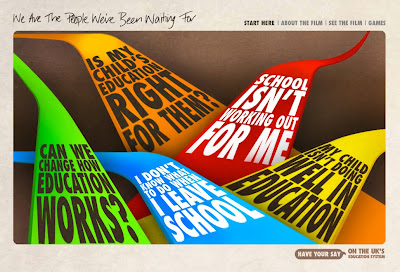 "We are the people we've been waiting for" is a new documentary about British education. It describes a crisis in education and what might be needed to avert catastrophe. It is reminiscent of "An Inconvenient Truth", the film about climate change created by Al Gore, in that it presents an imminent tragedy and offers suggestions about what can be done about it. Central to the ideas is the fact that the education system is not currently making the most of human potential and creativity. Sir Ken Robinson is one of the talking heads in the film alongside Henry Winkler (The Fonz), Germaine Greer and Richard Branson.

Here is a short extract from the film from YouTube:

You can see more extracts via the official website. Take a look and let us know what you think.
Posted by Jon at 4:19 pm