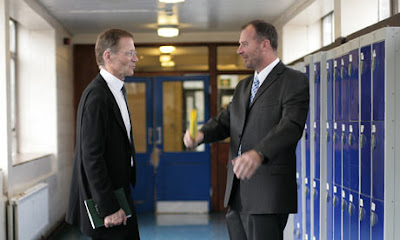 Nicholas Serota is sitting on a small plastic chair in a school hall, facing a sea of expectant 11 and 12-year-olds in blue sweatshirts. The director of Britain's Tate galleries is stepping out of his comfort zone – becoming, for one day, the headmaster of Thomas Tallis school in south-east London. Assembly begins and he listens intently as teachers from Ghana, St Lucia and Malaysia tell poignant stories about their childhoods as immigrants to Britain. "It was," he says later, "incredibly moving."

If the 1,670 pupils at Thomas Tallis – a specialist arts college in a deprived area of London that's just been christened a "national school of creativity" by Arts Council England – are surprised to find one of the country's top curators in charge for the day, they don't show it. This may be because their usual headmaster, Rob Thomas, is hovering in the background, showing Serota the ropes.

The men are taking part in a series of job swaps organised between headteachers and arts leaders by the Culture and Learning Consortium (an umbrella group of arts funders). Earlier this year, it published a report saying cultural organisations, such as galleries and theatre companies, should work more closely with schools, in order to get more creativity on the curriculum. Serota is here to see how he can make this happen.

Strolling through the narrow corridors, he pauses at some brightly coloured collages on the theme of the 2012 Olympics: the pupils were divided into 57 groups, each representing a country, and had to put together a bid to host the games for that nation. Many children chose countries their families originally came from. Serota has reason to pay attention – he's on the board for the 2012 Cultural Olympiad. "It makes me conscious," he says, "of the tensions that exist in people's identity. Are they going to be cheering when a gold medal goes to someone who's ostensibly British, or are they going to be really thinking about Jamaica, or Bangladesh?"

Next on the timetable is a year 13 art class. Fascinated, Serota moves around the room, stopping to ask one student, who is painting a woman screaming in agony, if he's familiar with Francis Bacon; and to see if another, creating a photomontage of a street scene, knows the work of Jeff Wall. The answer, in both cases, is no. The whole experience, says Serota, is a bit like entering an artist's studio: "You go in and you're looking at something you've never seen in your life before. You have to tune in really quickly."

A meeting with the pupil-led Creativity Action Research Group, set up to explore how teachers and students can make lessons more creative, follows. Serota works hard at drawing out the quieter students. "Like in Tate meetings," he says, "sometimes the quiet ones have the best ideas." Then, after tea and biscuits in the crowded staff room, and a tense meeting with a pupil about behavioural issues, he's interviewed by Tallis TV, the school's very own TV station, and drops in on a year 8 lesson in internet technology. "We did not," he says, "have anything quite like this at my old school."

Serota is not called on to issue any detentions and, when the bell rings at the end of his command, he seems to have enjoyed himself. "The great thing about teaching," he says, "is stimulating young people's curiosity. It reminds me of some of the best moments I have – working with younger curators who haven't had it all beaten out of them." Has going back to school taught him anything? "I need to get out of my office and into the gallery. I need to get to know my staff better." Laura Barnett

'We think this is boring. So go crazy. Show us what you can do'

In a small meeting room overlooking Tate Britain's elegant entrance, a team are unfolding a guide to the organisation's vast website. Made of several dozen pieces of paper held together precariously by sticky tape, it looks a lot like a school project – the sort of thing that Rob Thomas, headmaster of Thomas Tallis, is very familiar with. And he wouldn't give this one good marks. "It looked quite funny," he says later. "Our pupils would be a bit more advanced than that."

Although he and his pupils do visit Tate Britain and Tate Modern, Thomas knows he can't rival Nicholas Serota's art expertise. So, for his first appointment as Tate director for a day, he's sticking to what he knows: bringing in his own pupils to help Tate make its website, well, funkier. They begin with the site's pages on The Kiss by Rodin. "The problem," says Sharna Jackson, Tate Kids editor, "is that these are just boring. Go crazy. Show us what you can do." The kids promptly pull the pages apart, demanding a comment forum, colours that feel less "angry" and "sad", as well as a 360-degree, Matrix-style view of Rodin's sculpture.

Meanwhile, Serota talks Thomas through one of his job's less enviable moments. In September, police urged that a part of Richard Prince's exhibit, featuring a photograph of a naked, 10-year-old Brooke Shields, be removed from Tate Modern's Pop Life exhibition. The gallery did so, a decision that earned it an unfavourable and, in Serota's view, irritatingly inaccurate newspaper article. Thomas recognises this kind of fire-fighting. "A lot of the issues I face around student well-being involve negotiating with the police and social services. Like Nick, I need to be skilled in diplomacy."

Thomas takes a taxi to Tate Modern. First stop is the cavernous Turbine Hall, dominated by How It Is, a 13-metre-high steel container by Polish artist Miroslaw Balka. Thomas follows Serota inside it, groping blindly in the dark. "It just got blacker and blacker," he says afterwards, somewhat relieved. It reminds him of Eye for an I, an installation made by his A-level pupils. "You went into a box, with letterbox-size slits around the wall, through which you could see students' eyes, expressing different emotions. Like this, it was about going into the unknown."

Lunch takes place in the seventh-floor restaurant. The stunning view across the river to St Paul's is, Thomas admits, nicer than the one from his school canteen. Summing up his day, he says: "I could see that Nick and the Tate really want to engage younger people, when traditionally that hasn't been the case. They make an effort to listen, which is what we do at school. It's about mutual respect. Once you build that, it works both ways." LB
Posted by Jon at 3:42 pm