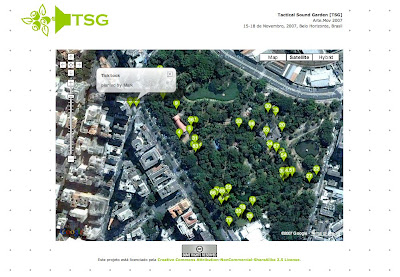 Check out this interesting project. Clicking on the image above will take you to a satellite map of an area in Belo Horizonte, the capital of the state of Minas Gerais in South Eastern Brazil. Each of the green tags represents a sound that has been planted in a park in the city. This is essentially a sound garden. These sounds were recorded and planted using various portable devices - phones, PDAs, laptops etc. Anyone equipped with a mobile device can wander through this park and, via a WiFi connection, tune into each of these sounds.

We attempted something like this before at Tallis and we talked a little last year about the possibility of doing something like it again. I think Mr Davids has been experimenting with recording sounds and embedding them into Google Earth. A project like this would be an amazing way to capture the sounds of the existing school and replay them when we are in our new building. The site of the current school building will eventually be a grassy play area. We could, in effect, plant sounds in this area before it has even been developed for the benefit of future listeners. Given advances in mobile technology and the increasing use of them for learning, I think we can anticipate that most people in the new school will have the tools to access our recordings and hear what it was like to work in the "old building".