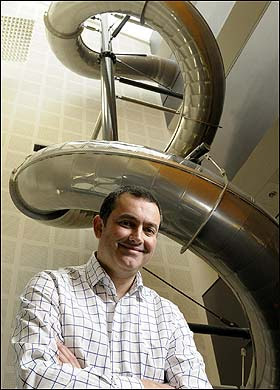 I was reading this article and I was thinking our school should have thought about having one of these in the new school building.

"A company unveiled today what it says is the first helter-skelter to be built inside a UK office building. Tenants taking up space in the new Electric Works block in Sheffield are offering their staff a quirky shortcut from the top of the four-storey building to the ground floor. The 85ft (26m) long spiral slide cuts the journey from the third floor down to seven seconds. Toby Hyam, managing director at Creative Space Management, which runs the building, said: "Electric Works will be the first office building in the UK to have a permanent helter-skelter for the use of those who work there. "It will also be available for business visitors and for conference visitors, but it will not be open to the general public." Mr Hyam went on: "Companies and the individual people working here feel that the helter-skelter reflects their approach to work, where the division between work and play is blurred and where the risk, imagination and creativity that characterises their work is going to be reflected in their surroundings. "In the current economic conditions it is encouraging to see that there are digital businesses which are sufficiently confident to invest in new offices and facilities."The building, the second of five which will form Sheffield's new Digital Campus, opens next week. It is designed for companies employing up to 75 people in the creative and digital sectors and will provide workspace for up to 400 people. The helter-skelter was designed and built by Wiegandslide, the same German company which built the slides on display recently at the Tate Modern art gallery in London."
Posted by Me at 10:07 pm

wow, that's a wicked idea.
i would of loved to have that in the new school but i think people would take advantage of it lol.

but i do think the the helter-skelter will bring out creativity from the people working there.

I agree with Seb, I think people would take a lot of advantage of it! But it would be cool to use/see I recone it would look amazing espec if it was huge!

Believe it or not, we did talk about having such a thing but it would have proved really expensive and not very practical. We do, however, have lots of aerial walkways in the new school, complete with viewing platforms, to provide better circulation around the building and opportunities to stop and chat with friends or simply take in the amazing view. Some people have suggested that this feature will be abused by students who will throw things from them on to unsuspecting passers-by. I sincerely hope that everyone will appreciate how useful and interesting they are and resist the temptation to satisfy those people who believe that young people can't be trusted. We shall have to wait and see.

I too hope that in the new school fellow students will not abuse the walk ways, I know that Northbrooke school had proposed something simular and the residents were against that with fears of students abusing the areas. I think that the walk ways will prove to be good, even now it would be possable to "throw" things at students by from the area that looks over resption from the 2nd/3rd floor however this never happens. I am sure the new areas will be used respectfully.

I think the idea of playfulness and risk are always important for creativity - and what better way than having a monster helter-skelter!

On a separate issue I was talking to Mr Walsh about a film making project that you are involved in at the moment. He was really enthusiastic about the way that students responded to having an outline rather than a minutely planned brief. He felt that students shifted up a gear when they had to supply more of their own ideas. Secondly he recognised that some of the students had more experience with the editing software than him and was happy for them to take the lead.