The beauty of networks 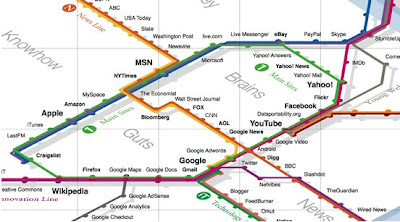 Harry Beck is quite rightly a design hero. His work in conceptualising the map of the London Underground network, disregarding geographical accuracy for legibility, has been an inspiration to many designers faced with the problem of representing complex information in a visually appealing way. The artist Simon Patterson has playfully subverted the relationship between the map and the information it contains in his work The Great Bear.

Japanese designers Information Architects have used this model to produce a map of the companies who dominated the internet in 2008. This is the third iteration of their design (the fourth is due out this month) and the most ambitious to date. As well as modeling their map on the Tokyo subway system, with companies like Apple occupying stations in upmarket areas of the city and Microsoft in the "cheaper" neighbourhoods, the designers have created two further layers of information concerning brand experience. This is how they describe the concept:

"We named the brand quality layer “Brand Experience.” It illustrates our perception of user experience and brand management of the main stations. We studied the usability, user value, and interface (simplicity, character, and feedback), and rated each site on a scale of eating at various types of Japanese restaurants.

We chose restaurants as the metaphor for brand experience because, from an interactive branding point of view, a visit to a website is like a visit to a restaurant in terms of service, feedback, content, pleasure, character, and memorability. And also because Tokyo has the highest density of good restaurants in the world."

It's interesting to see which companies do well in terms of their perceived brand experience, but what I love about this more than anything is the analogy between brand quality and food. I wonder of there is anything in this for us with regard to our thinking about the Food for Thought project?

On the subject of information design, I stumbled across the Visual Complexity site today. It aims to be "a unified resource space for anyone interested in the visualization of complex networks." Given the increasing significance of all kinds of networks as a feature of modern life, this site could well become an important resource. I followed the links to a couple of sites and the one that really grabbed me was Glocal. The Glocal Project is a collaborative, multifaceted artist-led project that examines the changing role of digital image making today. Its main aim is to examine the "new digital lives of images." I downloaded a couple of the software toolkits which proved to be a lot of fun. You can choose from the following simple applets which allow you to create a variety of photographic images based on historical precedents: 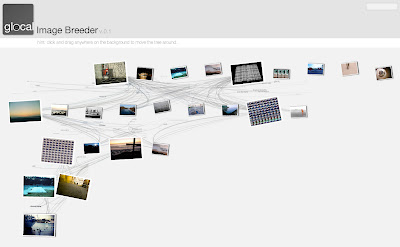 I'm particularly fond of the Motion Sequence applet! I was also keen on the Image Breeder which produces families of images based on a kind of genetic metaphor. You choose two images from a list of thumbnails and they "breed" to produce various offspring. I assume this is something to do with the way they are tagged. Fascinating stuff. Not only is this attitude to digital images really exciting but they've gone to the trouble of making the site extremely beautful too. Not just for the nerds.
Posted by Jon at 7:50 pm