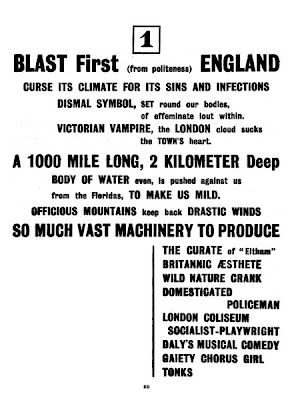 Here are links to a few other manifestos that have caused a bit of a stir in their time:

The Stuckist Manifesto, 1999 - These folks have made a name for themselves by protesting about the Turner Prize. They are opposed to conceptual art and love painting. "The Stuckist paints pictures because painting pictures is what matters."

The Dadaist Manifesto, 1921 - This is what the Stuckists dislike. Conceptual art started with the Dadaists, a bunch of radical poets and visual artists in Zurich, Switzerland who themselves were disgusted by the terrible waste of WW1. Their response was to create Anti-Art, that embraced chance and the absurd. "If you find all your ideas useless and ridiculous, know that IT IS DADA BEGINNING TO SPEAK TO YOU"

The Futurist Manifesto, 1909 - This is a brilliant bit of provocation. The Italian Futurists loved speed and energy. They had some dodgy political views. They thought that it was a good idea to destroy the past which included things like tearing down libraries. They wanted Futurism to change all aspects of life and even created a Cookbook. "Time and Space died yesterday. We are already living in the absolute, since we have already created eternal, omnipresent speed."

BLAST: The Vorticist Manifesto, 1914 - The Vorticists were a British version of The Futurists. They produced a couple of issues of BLAST magazine at the start of the First World War. They liked to BLAST and BLESS things to indicate whether they liked them or not. I'm not sure who the Curate of Eltham was but he gets properly blasted. "BLAST First (from politeness) ENGLAND. BLESS English humour."

The Surrealist Manifesto, 1924 - This is a long document but worth skimming through. The Surrealists were fascinated by the power of dreams and the unconscious mind. They were hoping to generate a revolution (of the Communist variety) through rewiring the way people saw the world. Look out for the dictionary definition near the end.

"SURREALISM, n. Psychic automatism in its pure state, by which one proposes to express -- verbally, by means of the written word, or in any other manner -- the actual functioning of thought. Dictated by the thought, in the absence of any control exercised by reason, exempt from any aesthetic or moral concern.

ENCYCLOPEDIA. Philosophy. Surrealism is based on the belief in the superior reality of certain forms of previously neglected associations, in the omnipotence of dream, in the disinterested play of thought."

Write your own manifesto - have fun!