Maslow and a creative curriculum

Apologies in advance for a relatively lengthy post! I was reminded recently of Abraham Maslow's Hierachy of Human Needs model (see above). The basic premise of the model, created in 1943 and adapted in the 70s, is that all humans experience basic needs. Beginning with physiological needs (breathing, sleep, food etc.), these needs progress to higher states, in clearly defined stages, until we are ultimately able to achieve "self-actualisation", a kind of wisdom. Until each stage of human need is achieved, we are unable to progress to the next. In other words, it is difficult to contemplate the level of your self-esteem when you haven't slept for three nights and are starving hungry.
One fascinating blogger has compared this hierarchy of needs with the rise in Web 2.0. Her theory is that social networking tools satisfy many of the mid-level needs in Maslow's hierachy because they are "open source" and positively require the active participation of users to develop the service, thus enabling them to achieve a sense of belonging to a community of peers and boost their self-esteem through acquiring the respect of others. Examples of these Web 2.0 services would include Wikipedia and Flickr, which are continually developed in partnership with users. 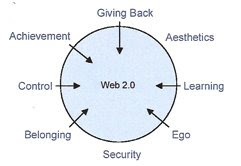 I began to wonder whether the above diagram would still make sense if you replaced the phrase Web 2.0 with School. Whereas needs such as security, belonging, learning and achievement all seemed to fit easily, I was less sure about ideas like control, ego, aesthetics and giving back. I've also been giving some thought to the idea of Open Source Education. More and more commentators are predicting the end of school as we know it Jim. This article suggests that a revolution in the free international distribution of online learning tools is just round the corner. The author refers to the massive amount of information (in all forms of media, not just text) already available online:
The number of songs available on iTunes – over 3.5 million
The number of books on Amazon – over 4 million
The number of blogs available online – over 60 million
The number of entries on Wikipedia – over 4 million
The number of user accounts on MySpace – over 100 million
The number of videos on YouTube – over 6.1 million
Several universities, such as the prestigious MIT in the States, have already made course material free to anyone in the world and initiatives like Wikiversity and Moodle are available to anyone who wishes to educate themselves. What does all this mean for the future of schools? Are classrooms the only place where successful learning happens? Do learners always need teachers?
So, if we put these ideas together, what have we got?
People want to learn. But what they want to learn isn't always what schools want, or are able through the limited availability of expertise, to teach. People like to learn. But not always in classrooms, at particular times of the day. If learners had greater control over the education process, there might be more opportunity to fashion it to suit themselves. If schools trusted young people (and their teachers) to work collaboratively to design learning opportunities not necessarily rooted in the classroom, everyone in school (regardless of their role or position in the institution) could learn together and from each other. If the objectives of learning were clearly defined by everyone with a stake in the process, and the relevant learning tools made available (in other words, made "open source"), could we not work together to create a new kind of education system that enabled all learners to progress successfully through a hierarchy of needs and ultimately achieve a measure of self-actualisation that includes, according to Maslow, the ability to be creative and solve problems?
Posted by Jon at 9:40 pm