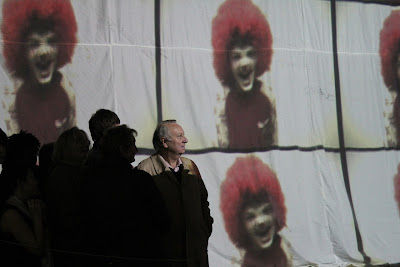 It's always great to see staff and students collaborating on rich, inter-disciplinary projects that have real audiences. But when the quality of the work is as high as it was during the two nights of 'Phobias', you realise that this kind of learning creates fantastic outcomes for all involved. The students of different ages get to behave like real arts practitioners, producing original and exciting work to a very high standard. The staff work as a team and learn skills from one another and the students, extending notions of what is possible. The audience leave with a sense of what can be achieved by young people and their teachers when they are prepared to take a few risks and trust in each other's skills.

Last year's 'Restaurant' project was the first time we had attempted an inter-disciplinary arts event quite so ambitious. I am delighted to say that 'Phobias' has raised the bar again. The audience was stimulated by a massive variety of multi-sensory experiences in a wide variety of art forms that wouldn't have been out of place in a contemporary art gallery or cutting edge theatrical space.

The company of costumed performers was enhanced by an army of backstage technical wizards with banks of laptops, speakers, cameras and other props. Visitors could begin their exploration of various irrational fears in the bar in two complimentary installations by feeling what it might be like to be be buried alive. Then it was time to be whisked into an operating theatre where they witnessed a patient close to death, live brain surgery via a video projection and the overpowering smell of chemicals and animal flesh. They then journeyed down a dark tunnel, where disfigured toys brushed against their faces, strangers screamed and hands reached out to grab their legs. Making their way through a hot, burning room and a door of flames, the audience then entered a large space which was quickly transformed into a mixture of therapy room, living nightmare and punishment chamber. Wall to wall video projections and a synchronised team of performers assaulted them with horrifying tales of death by fire, water and earth, before they were finally and unceremoniously ordered to leave.

The entire event was a real tribute to the energy, creativity and faith displayed by a dedicated team of staff at Tallis and the immense trust they have in the talents of our students. Thanks to everyone involved!
Posted by Jon at 9:51 pm

I'm sorry I couldn't stay. It looks like you all had a lot of fun scaring all the phobias away. Truly impressive.